Richard is trying to push the idea that being similar is unique and only applies to evolution period. That genes being almost alike is mutually exclusive to the evolution idea and could never apply to Creation or a Creator.

In engineering where intelligent designers create things, build things etc… When things are made that serve one purpose, are they really really that much different even though it maybe an original creation? Examples:

1) Cars. Made and created by intelligent designers, do they really differ that much from the original design even with technologies changing everyday?

2) Bridges. Made and created by intelligent designers, do they really differ that much from the first bridge even with all the technology changes?

3) Houses. Do they really change much from the original first house design?

The problem that Dawkins refuses to see with his answer is that DNA is required baseline for all life. So all life (like the car, bridge and house), are similar because with DNA how far could you really go from the original code that allowed life to exist?

If you think about it, evolving with no direction from intelligence would really produce a non-similar code instead of a related code where all life has code that is related.

The idea is basically lame and Dawkins is promoting a falsehood of an idea. Intelligent design of physical things prove over and over and over again. That the original was the base, and the base will “always” be part of any upgrades, new technologies, or even redesigns.

Let’s take programming for computer operating systems for example. Whether it’s Windows, Linux, Apple or whatever. Is not all the designs based on the first one aka DOS? And regardless of how they upgrade it, does not all still require some type of BIOS programming to help the hardware communicate with the software?

And where did DOS go? I bet many of you still think that Windows 10 does not have DOS. Well it does it’s just hidden. I repair hardware, software, and build computers. I also design website like the one you are on. So I’m going to bring up a DOS screen in my Windows 10 just to show you the programming never really got rid of it. The pic of the DOS screen is below.

The Dos is the black screen and I put the system information screen in front to show that it’s really Windows 10. I can type commands in the DOS and it will execute them. Did computer coding for operating system evolve naturally, or were they designed?

So saying or claiming similarities = evolution only is about as lame as the picture above is funny. Because randomness has no direction therefore cannot produce similar things. That’s why in biology…

You don’t stray much from the base programming because a designer original design is the template for everything else.

And you don’t get program without a programmer. In programming the programmer often leaves the mark aka signature to show who programmed this program. Who do you think was the first to do that? God was.

So no Dawkins, it’s not that we don’t listen and have our fingers in our ears going la la la, I can’t hear you. It’s you and those like you that do this. 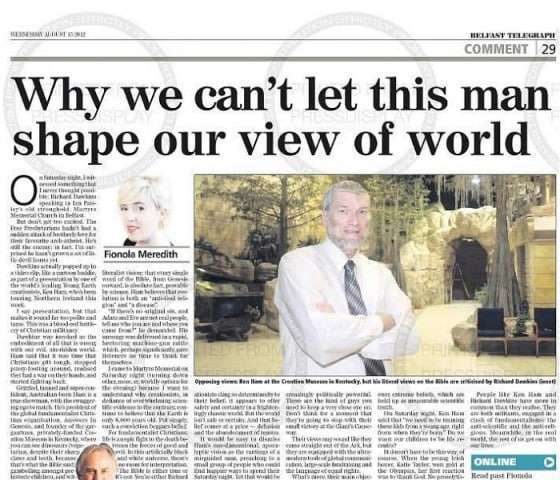 Can Richard Dawkins be corrected?