Is there evidence of the Red Sea Crossing? Let’s take a look at the video below.

What you'll see in this video above.

The small village given to Joseph by Pharaoh in the land of Goshen.

The computer recreation of what the buildings looked like which matches buildings in Israel.

The bricks made without straw which did not hold up over time.

Wall painting of Moses, after he found out he was a Israelite, getting onto a task master for beating a Israelite.

The alter that was built while Moses was getting the 10 Commandments.

The Egyptian cow carved on the side of alter, proving it's connection to Egypt and the Israelite.

The rock that Moses hit and it split and water ran from it. The rocks beneath are smoothed from the water flow.

Mt. Sinai. The mountain God came down to which burned with fire and Moses got the 10 Commandments. Noticed it's burnt from the top down.

The path the Israelites escaped from Egypt on, and the beach they stood on before they crossed the Red Sea.

The chariot wheel and axle found on the sea floor.

Golden chariot wheel that either belonged to the Pharaoh, or a high ranking military personnel. This cannot be moved for 2 reasons. It's laminated and the wood no longer exists making it very thin. And it's against the arabic law to remove anything from their oceans.

The robot camera used to film the underwater evidence.

Chariot wheel grown over with coral.

4 and 6 spokes chariot wheels found which coincides with the biblical timeline.

The professors and associates

Etc... There is much more on the video.

4
0
Human and Dinosaur evidence found together

Human + dinosaur footprint found together
These prints were found in Glenrose Texas at the Dinosaur Valley Park, They were under a rock slab that weighed several tons but was washed away during a flash flood in the river. Many lies have been told about these prints which is basically atheists not wanting to face reality. None of the false accusations panned out and in a court of law would be considered hearsay. The lie about this print is that a creationist names Carl Baugh carved it. No proof, no witness, just hearsay. My question is, a print much smaller then almost 2 feet long would have been more convincing. So why carve one that big?
Taylor Trail prints. The first e images are the same prints.
Because atheists did not want anything to do with them, they did not use any of their grant monies to try and preserve them. Today they are so degraded that one cannot even tell what they are. much to the atheists happiness. Again they cannot face reality.
default 1
default 2
default 1
default 2
default 1
default 2
This is the burdick print
it is part of Texas history. back during the depression. the government started a get back to work program. Where they hired men to do odd jobs. One was removing rock slabs to display in museums. Nobody wanted human footprints in their slab displays. And that's how these prints were created. The workers were told to cut them off. They asked the foreman if they could keep them and that's where the problem started. Atheist told lies about these and made false accusations. All of which in a court of law would be considered hearsay.
Drawing of what the government wanted the workers to do
Once done these would be moved by commercial flatbed trucks to museums all over the U.S.
The workers actually cutting the slabs from the river bed.
The largest went to the American Museum. The museum still displays it with a T-Rex on top of the prints. But on the page from their site the slab is barely visible. https://www.amnh.org/exhibitions/permanent-exhibitions/hall-of-saurischian-dinosaurs/tyrannosaurus-rex
Fake Christians like Glen Kuban claim that all of this is fake.
Yet he or no other atheist has produced absolute evidence to prove it. Only opinions and hearsay. Because if the had evidence of fraud they could have taken those whom they told lies about to court. Because defacing government property is a federal offense. Yet no one is in jail to that false accusation of someone carving the human prints. Again, only hearsay.
On and on these false accusations are made
Yet no one person from the atheist side ever proved anything. No one. And I challenge an atheist to do so. And not with hearsay. Still waiting for someone to go to jail over the accusations of defacing government property. Carl Baugh is still alive and there has been no court case. No witnesses produced. Nothing. Lying fo evolution has become common, but if evolution is a true proven fact that makes the accusations a oxymoron because truth never needs lies because it was true to begin with. Atheists don;t get the concept and never will.

Inca stones match the later found dinosaur skin
Atheist consider this evidence debunked. And will not accept new evidence that proves otherwise. They are not interested in truth and reality, only that their stance that evolution is true and their worldview that God does not exist remans looking true without actually proving it true.
A closer look at how the dinosaur skin matches the carved stone.
How did the carver know what the dinosaur skin looked like when no one has ever seen a live dinosaur to even know?
Another view of how the skin matches the carving
Atheists do not want truth and reality or they would take a closer look. But they refuse to talk about it since this find.
The original stone that the new evidence was compared to.
default 2
A picture taken of the Inca Burial stones museum.
There are thousands of these stones. They were found in a cave on a beach. The last image in this section is a video on the stone's history. Click to watch it.
The main reason these stones are truly hated by atheists
they defy the fake history of evolution.
The atheists went as far as to discredit these stones by
hiring so called experts, who by the way already believed evolution is a true proven fact, to examine the stones with only one goal in mind. Discredit them anyway they could.
So to discredit them they again made false accusations that were not proven in a court of law.
Accusations that the Peru government would have been happy to jail someone over because they have very strict laws on Peru artifacts because so many people steal them
Here's a pic of the person who owns the Ica Stone museum.
default 2
They paid this guy, who makes replicas for the tourist. To claim he carved all of them. Question:
If no man has ever seen a dinosaur, how did this man know the exact designs on the skin that would be found after all this was done? Chance? No, he saw the original ones so he knew exactly what to draw. The thing that the atheist leave out is how strict the laws are about having any Peru artifacts. They will arrest you, you'll get sentenced to 5-10 years in prison. And because the prisons are so bad, most only live 3 years because they starve to death or catch a disease. So why would this man admit to ever owning an original Inca stone when it would mean certain death? They don;t tell you that in the BBC documentary. Because they are not used to telling the truth.
A video. The history of the Inca burial stones.
Click on image to see video the atheist call a lie.

Human misc. out of place evidence

Nearly 200 living fossils known and that number grows every year.

Nearly 300 frozen in time amber amber evidence, and that number grows every year.

Over 100 known soft tissue and blood evidences found and nearly 50 of these finds were published.

And the reason I support this challenge is because if this cannot be done. It will be just one more things that can be used against evolution..

You can get the first 3 chapters free, click on image.

The difference between intelligence and programmed response.

You can accept the challenge by clicking on this image to visit website.

This challenge is much like possibility math. An intelligent process has the ability to learn from it’s mistakes. Therefore won’t repeat them. 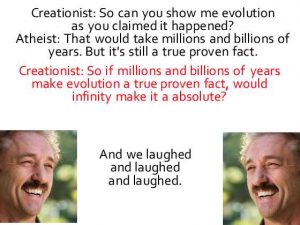 When there is no answer, and time is given instead of proof. Then time becomes the excuse for not having proof. Time is the atheist God did it excuse without God. ~ Issac

The people behind this challenge

Yep, you heard it right. Not only clothing but because jewelry is also considered a part of your attire, that will be banned also. Atheists cannot prove God does not exist, so the next best thing is to silence us. Poor atheists. As to why they censor everyone.

They have been finding soft tissue fossils for a while now. Science, at first called it a fluke to explain away why this exists at all. But because it’s become more commonplace they have accepted the evidence but not what it points to aka the flood and Young Earth Creation (6,000 years).

Below is a image of how many times soft tissue find unfossilized have been published. The find range over 100 and the published articles almost 50.